Once again, I feel like a fraud writing a ‘What I’m into’, when I’ve blogged approximately zero else this month. But at least there has been movement…a post I’ve been drafting for the last couple of months (yes, really) is soon to hit this site! Watch out for it soon.

I have, however, been enjoying life away from the computer screen: 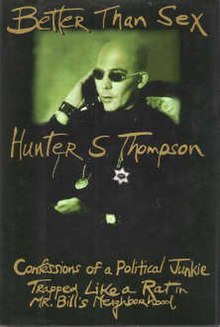 I mentioned Hunter S. Thompson’s Better than Sex last month. It did take me all month to finish, and Desert Dad thought I was crazy (“Why do you keep reading that when it’s such hard work?”) but what can I say? I’m a starter-finisher and can’t help myself. In a nutshell? Thompson created ‘Gonzo journalism’, where fiction and non-fiction are weaved seamlessly together in a haze of alcohol and, sometimes, recreational drugs. The book is about the 1992 Clinton campaign, with crazed anecdotes thrown in – some of which (I guess) were real, some of which were exaggerated, and some of which might have been totally fabricated for all I know. But his style is quite endearing really. I’m not sure I’ll be reading any more by him – the experience wasn’t unpleasant, but I’m just not that into politics. Or swearing.

A couple of kids’ books have gone down a storm in the Desert household this month. First up, Fantastically Great Women who changed the World. I discovered this a couple of months ago in an independent bookshop, and we really got into it this month, discovering the achievements of Marie Curie, Mary Anning, Frida Kahlo, Anne Frank, and many more. Mister (7) and Missy (5) loved the way the book is written – succinct chunks of really fascinating info – and the design is beautiful too. I’d recommend it for both boys and girls – and parents! I learnt loads!

Second, Everything a Child should know about God is a beautifully illustrated systematic theology for kids. Again, my 7yo and 5yo love it – I would say it’s perfect for the 4-8 age group, but could be enjoyed by those younger and older. It does what it says on the tin – under several headings such as All about the Bible, Who God Is, Jesus comes to help us, and Why we go to Church. Desert Dad (fussy theologian) reckons it’s too basic, and doesn’t address the deep questions kids often have – but I reckon it’s a great solid basis for any child being raised in a Christian home, and well worth a fiver. And, besides, I’ve told DD he should meet the gap in the market and develop an apologetics book for kids, so watch this space…

Friends, it was May. Far too late in the year to be continuing to put in any effort whatsoever to creating exciting meal plans. And, besides, the sun shone for at least five days this month, rendering me incapable of doing anything other than throwing some leftovers together or chucking some dead animal on the barbecue. That we did, though – another item ticked off the Summer Bucket List. UK summers (especially in the North) are so short that I often feel like if I haven’t cooked a BBQ, worn shorts, got the paddling pool out, been to the beach and drunk Pimm’s all in one day, I may well have missed my chance for another year.

Actually – what am I saying? This was the month that I made my own sourdough bread, a crazily lengthy process which should really have happened in the enthusiastic days of early January, when anything is possible – not May, when I’m jaded and exhausted. Paul Hollywood claims, enthusiastically, “Once you’ve made your own bread ‘starter’ and produced a few loaves using it, there’ll be no going back to supermarket bread.” Er, yes, except supermarket bread doesn’t involve a small amount of rancid-smelling nothingness sitting on your worktop for several days, demanding as much ‘feeding’ and ‘nurturing’ as a young child, followed by a bread-making process so lengthy it requires you to book childcare and, quite possibly, a haircut – just in case you don’t make it out the other side before your roots are halfway down your head and the split-ends are numerous. OK, I exaggerate, but artistic licence is my privilege and I’m going to use it.

The bread was tasty, though. And lasted about 15 minutes in the presence of my hub’s extended family, with whom I was sharing a house for the weekend. That bit was quick at least.

Needless to say, second-time round I attempted to use the bread machine to speed things up. This picture tells you all you need to know about that idea.

I made a moussaka which was eaten enthusiastically by ALL SIX MEMBERS OF MY FAMILY, and also the only proper meal I took a picture of this month, so am inserting it here:

(OK maybe I lie. Perhaps it was five members. Or four. I can’t remember. A majority, anyhow.)

Oh – and one day during May, I may have eaten a lunch which consisted entirely of breadsticks meant for the kiddoes with my absolutely favourite dip. There’s nothing like discovering that a favourite food needs to be used by <today’s date> to throw out my usually maverick attitude towards food safety. Mostly, I’m all “If it smells fine and looks fine and tastes fine, it’s fine” – but on discovering an unopened Onion and Garlic dip, which is the most delicious savoury item in the whole entire universe, I suddenly turned into “Ooh, well I MUST eat that, lest the hub or the kiddoes try it and get food poisoning…what sort of mother would I be to expose them to food one second past its use-by date?”

That was a good day, and I have no regrets.

British food explained for Americans made me giggle out loud on several occasions – particularly funny if you know both food cultures.

I’m sure I read other stuff but nothing stands out. Probably just full of crazed Hunter S. Thompson lines to really absorb anything sensible.

This month has been dominated by my kids (Missy especially) discovering Katy Perry and Taylor Swift. We have reached That Stage. Because I’m so cool, I enjoyed the opportunity to learn some new chord sequences as I busked the songs the kids were bringing home, appreciating (in particular) the use of the supertonic and flattened leading note chords in ‘Roar‘ – sadly, I’m not even joking. Quote of the month was Missy announcing, “Wow, Katy Swift [sic] has done that song that’s in ‘Sing’!” I think ‘Katy’ would be thrilled to know that her hard work was being credited to a couple of animated pigs.

I’ve had to add the ‘stage’ part to this section this month, because I went to the theatre THREE TIMES!! We saw Stewart Lee, one of my favourite stand-ups. I can’t describe just how brilliant he is, so if you were expecting me to, then watch this instead – it’s total genius. We finally got to see the Reduced Shakespeare Company, after years of not getting round to it, and that was great too. I’m sure I’d have got a lot more of the references had I known more Shakespeare, but it’s so cleverly written that it’d be funny to someone who knew no Shakespeare plays whatsoever.

Then, because sometimes you need some misery to balance out the fun, I went to see Jane Eyre with a couple of friends. Having read the book and seen various film/TV adaptations, I was interested to see how it would be staged, but it was phenomenal, with a live band on stage and original music which was neither of the period, nor jarring with it. The whole performance seemed to utilise modern theatre techniques without destroying the period and essence of the original. I loved it! It’s still got a fair few dates left on its tour, so click here if you’re interested – I highly recommend it.

Screen-wise, we’ve been glued to the new series of Twin Peaks, having devoured the original seasons a couple of years ago. I’m a girl who likes conclusions, so David Lynch’s bizarre twists and turns and subplots and sub-subplots shouldn’t really be my cup of tea, but I guess with every episode I’m holding out for an answer of some kind. And the ride is so good that I’m not even that bothered.

I transformed our garage!

Perhaps a small feat for many of you, but for me this has been a year-long dream. You read that right. Menial tasks have become something I can only dream of having the time to complete – so this makeover is something I’m immensely proud of. Mister and Missy helped me build the extra storage, and hopefully it means that the clutter-free space is now sustainable.

As mentioned above, we enjoyed a gorgeous weekend away with the extended fam at a big old farmhouse with indoor pool and beautiful grounds. Clergy families rarely get a weekend away, usually having to save up Sundays-off for summer holidays, so this was a big treat for us all. The kiddoes had a wonderful time in the pool and being spoilt by their relatives, and Mister taught himself to swim in a morning!

I had a job interview – the first in 11 years! I didn’t get it – which I’m totally happy about – but, also, I didn’t make a tit of myself and, in fact, got some rather lovely feedback which made me smile and jump around a little bit. Turns out SAHMs aren’t totally de-skilled when they take a career break 🙂

I went to a bridal shower, and then the subsequent wedding, of some fab church friends. Weddings make me so happy, especially when the main players are so entirely brilliant together.

And, because it was sunny, I did All The Laundry (I have a thing about air-dried clothes), which inevitably meant not being able to keep up with the Putting Away. Piles like this started to appear all over the house.

How was your May?

Linking up, as always, with Leigh Kramer’s What I’m Into series.